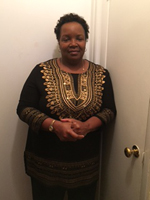 During her graduate studies, Valerie Andrews received and acknowledged her call to preach the gospel and became the first female clergy licensed by the Bright Side Baptist Church of Lancaster, PA. Now living in Philadelphia, Reverend Andrews is currently Associate Minister of St. Paul's Baptist Church, West Chester, PA, and Executive Administrator to the Senior Pastor of the Bible Way Baptist Church. In this role, Val provides professional, administrative and personal support to the Senior Pastor, manages the office staff and is responsible for coordinating other tasks as assigned.

Val is an active member of the Philadelphia Baptist Association where she served as an Adaptive Challenge Consultant for Domestic Violence, and represented the Pennsylvania region as Senator for the Minister's Council of the American Baptist Churches (USA). She has been President of the Pennsylvania Eastern Keystone Baptist Association's Women's Division, and, was appointed to the National Executive Board of the American Baptist Women's Ministries of American Baptist Churches-USA, as Coordinator of Events. In 2013, she was nominated and honored as one of 104 Influential Black Women in Philadelphia by the N.A.A.C.P. She is the proud mother of three children: Joy, Jasmine and Ronald Jr.

Val earned a B.A. in Liberal Arts/English and M.Ed. in Counseling Education from Millersville University, was ordained by the Pennsylvania Eastern Keystone Baptist Association and earned the M. Div. degree from the Palmer Theological Seminary, and is a Doctor of Management student in the Strategic Leadership program at Philadelphia University.