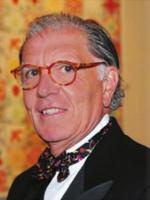 Chairman, Board of Directors

I began my legal career as a litigation attorney at Stradley Ronon Stevens & Young LLP in Philadelphia then transferred to Stradley's corporate practice. After making partner, I left the firm and joined Technitrol Inc. which had been founded in 1947 by Gordon Palmer and three other University of Pennsylvania engineering graduates, all of whom helped develop ENIAC, the world's first electronic computer. Technitrol held the first patent for a magnetic disk drive, the most widely licensed disk memory device during the 1960s and 1970s (the company's licensees included IBM and General Electric). For Technitrol, I served as President then Chairman and Chief Executive Officer, retiring in 2010 at which time the company changed its name to Pulse Electronics Corporation.

I also served as the President and Chief Operating Officer of Hordis Brothers, Inc., Director of Para-Chem Southern, Inc., and Glasstech, Inc., and a Trustee of Manufacturers Alliance/MAPI, Inc. I am a Vice President of the Boy Scouts of America Cradle of Liberty Council Executive Board, a Member of the Board of Trustees of the Foreign Policy Research Institute, and Officer and Chair of the Board of Directors for the International House of Philadelphia.